Due to staffing challenges, we are currently unable to accept orders under $2000 and with a less than 3 week
lead time. We look forward to reassessing this policy in six months,
and apologize for any inconvenience this may cause

Please note that the product and pricing information is the not up to date.
Please reach out to 732.746.1110 or email us at corporatesales@astorchocolate.com for the most up to date information 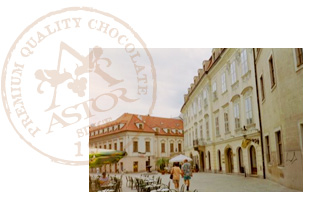 1929
On the banks of the Danube River, in Czechoslovakia, near the picturesque Carpathian Mountain Range, Leopold Grunhut began studying the art of fine chocolate making. Before long, his skills were acclaimed and he began creating unique chocolate confections with delicate balances of flavor in his small kitchen. Using only fresh cream from the local farmers, his small operation soon became the talk of the town. Within five years, he had four stores in town selling his confections. 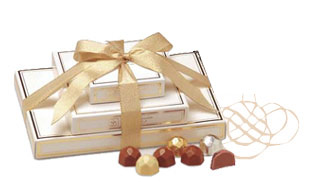 1950
After WWII devastated the region, the company relocated to New York, with young Erwin at the helm of the family business. Under the Astor Chocolate name, the business flourished with Erwin’s creativity, and unique style. Astor Chocolates European inspired confections soon achieved national renown. Astor’s name in fine, quality chocolates soon spread and their first large-scale customer was Macy’s. Many other department stores soon followed and Astor’s reputation grew. They were synonymous with European tradition, signature distinctive flavors, and original thinking.

Over the years, Astor became famous for its innovations in the chocolate market.

In the 1960’s it was illegal to sell liqueur-filled chocolate. Erwin thought of a creative alternative, a chocolate cordial cup to be filled with liqueur. This dark Belgian chocolate cup soon became a best seller, as the company aligned with brand name liqueur brands such as Kahlua, Nocello, Tia Maria as well as private label packages for other liqueur companies. The classic liqueur cup gift box was prominently displayed in the window of Bloomingdales and a feature article was written in the home magazine – House Beautiful.

In 1965, the Chocolate Chess Set was designed by a famous artist. It came complete with solid dark and white chocolate playing pieces and an edible board in a beautiful gift box. This too became a popular item and was featured in Neiman Marcus, Bloomingdales and other popular mail-order catalogs of the day.

Astor Chocolate was expanding rapidly. They moved to a large new factory in Glendale, New York. This enabled the installation of new production equipment to facilitate high quality production in a very short turnaround.
In the 1970’s, Astor introduced customized turndown chocolates to the American hotel market. These chocolate mints soon became the hallmark of turndown service at many famous hotels. Astor remains the industry leader in chocolate amenities for the hospitality industry.

Expanding on its success with chocolate gift-shops, Astor imported a European concept by creating a line of chocolate souvenirs featuring photos and scenes of cities across the USA. Airport and souvenir shops nationwide now offered sweet memories to travelers to take home to family and friends.

As sales grew, there was a need for a larger manufacturing facility and the company moved to its current headquarters - a 120,000 square foot modern facility in Lakewood, New Jersey.

2000
In 2000, Astor broadened its vision by acquiring Le Belge Chocolatier, a San Francisco based chocolate company. Founded by a Parisian couple, Philippe and Heugette Dumas, this boutique shop was providing the country’s most discerning resorts with luxurious confections. Le Belge is renowned for its artful blend of European tradition, fine Belgian chocolate and premium ingredients.

In 2005, Le Belge moved into a newly constructed facility in Napa Valley, California, a perfect setting for the flavorful, fragrant, and luscious chocolate they are famous for. Le Belge continues to produce small batches of artisanal chocolates, inspired by their European founders

Astor Chocolate continues to grow and expand its horizons in the many markets that it serves, while upholding the foundation of old-fashioned values and unbridled creativity that brought on its initial success.